An Open Letter to Representative Boehner and Senator McConnell

During my life I have lived in poverty, been part of the middle class, and amongst the top 0.3% of income earners in this country.  I worked through poverty in my 20’s, having a child born with serious medical problems who was not eligible for health insurance, to earn an advanced degree from a medical college.  I rose from the rank of a bench scientist to become an executive and corporate officer in publicly-held pharmaceutical corporations.  Based on a single contract, and starting over my garage, I founded a regionally-recognized multi-million dollar ‘small business’ during the 1990’s and provided employment to hundreds of individuals during its existence.  I have been an adjunct professor and manage two small business enterprises in securities and real estate investment.  From a family perspective I left my corporate pursuits several years ago to devote time to, and care for, my wife who was stricken with serious illness.  She has given generously of her time to the less fortunate, was awarded Wake County and NC Volunteer of the Year, and has faithfully paid all her taxes to support our national agenda (as well as your healthcare benefits), only to be considered uninsurable in the wealthiest nation in the world.  From a civic perspective, I was appointed to the public position on the North Carolina School Technology Commission by the House Speaker and donate time to foster children.  It is this diversity of experience, having lived and seen life from several different economic and social perspectives, that has shaped my opinions.

I take great exception to your threat of letting benefits to vulnerable classes expire (tax cuts to the middle class and unemployment benefits to the needy) during this still fragile economic recovery unless the Bush era tax cuts to the wealthiest are preserved.  In the world of business, we do not have the luxury of living by ideology.  We base decisions on information and are obligated to adopt policies and strategies that optimize return to our shareholders.  Our country is really no different and we must have an obligation to keep our system healthy and fiscally sound.  I find your tax policies have failed, and failed miserably, in this regard.

I believe you owe the American public explanation on several points that follow.  I recently posted articles that provide detail and references to support these points (ref) (ref).

1.  Within the income levels that define the middle class, individuals and families work hard to get ahead only to face increasing levels of income tax.  Yet at the income levels that define the wealthy, that class pays a flat tax with unlimited upside, and actually has a lower overall tax rate than the middle class due to a disproportionate amount of income from dividends and capital gains.

Comment: Could you explain to the public how that constitutes a fair tax system, especially since almost a quarter of this nation’s income is held by 1% of the population?

2.  When tax cuts largely benefitting the wealthy were put into place in 1981, our country was promised that the stimulative effects of this policy would produce a balanced budget by 1984.  Following 2000, when our country had budget surpluses and was paying down the national debt, we were told that reinstatement of Republican tax cut policies would preserve the surpluses.  In both cases Republican tax policy failed, and failed substantially, in creating or maintaining a balanced budget.

Comment: Could you explain to the public why your party continues its pursuit of a tax policy that has proven to be ineffective in creating or maintaining a balanced budget.

3.  You both have stated on several occasions that Washington has a spending problem and not a tax problem.  Since the mid-1970’s we have had 5 complete Republican presidential terms (all with Republican tax cut policy in place) and 3 complete Democratic presidential terms (all with progressive tax rates in place that extended into the wealthy).  Under all 5 Republican terms debt was substantially increased when expressed as a fraction of our economy.  Under all 3 Democratic terms debt was reduced when expressed as a fraction of our economy.

Comment: Could you please explain to the public why Washington seems to have a spending problem only when Republican tax policy is in place. 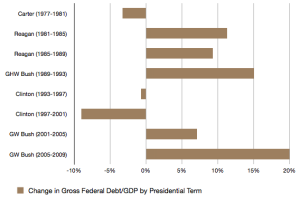 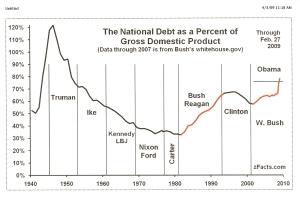 4.  Loss of tax revenue from unemployment and stimulus spending aside during this current economic downturn, the amount of debt compiled during years where your tax cut policies have been in place is in the trillions of dollars.  Around 80% of our federal budget consists of defense spending, Medicare/Medicaid/CHIP, Social Security, Welfare and interest on the debt.  The remaining 20% is divided amongst many smaller areas including education (badly in need of modernization to keep our future workforce competitive), infrastructure, etc.  Your Pledge to America calls for increased military spending in the form of a fully funded missile defense program.

Comment: If the deficits in Washington are due to a spending problem, it is immoral to continue passing debt to future generations (who have no say in the matter) without correcting the spending problem.  Could you please explain to the public exactly what programs constitute a spending problem and what you intend to cut to balance the books – this question has been side-stepped time and again.

5. You have both stated that tax cuts to the wealthiest of Americans is good for jobs growth.  Total non-farm payroll employment is the measure of jobs creation most frequently used by economists and the media and will be the measure discussed here.  With the exception of president Reagan’s second term where job creation was on par with that achieved during Democratic presidential terms (but at the expense of driving up debt), job creation during periods of Republican tax policy significantly lagged that during Democratic presidencies where tax increases were extended into the wealthy.  Additionally, job creation during the G.W. Bush tax cut years was the lowest since the presidency of Hoover.

Comment: Could you please explain your position to the public that your tax policies are good for jobs growth in light of actual non-farms payroll data. (* expressed as millions of jobs).

6.  You have taken the position that allowing the tax cuts for the wealthiest of Americans to expire would hamper jobs creation during this economic recovery.  With Republican tax policy in place it took 22 months and 12 months to achieve sustained jobs growth following the recessions of 2001 and 1990-1991, respectively.  Yet, following the passage of the stimulus legislation, time to sustained job growth occurred in only 6 months after the end of this recent severe economic downturn.

Comment: Could you please defend your position to the public that preserving tax cuts to the wealthiest are necessary to stimulate job creation during this current recovery in light of historic job recovery data.

Comment: Could you please explain your position to the public that increasing personal income tax to the wealthy is detrimental to small business growth when no tax is paid on business income that is spent on growth (hiring expenses, salaries, leases, marketing, sales, etc).

8.  Tax cuts, largely favoring the wealthiest who have high savings rates, were supposed to increase US capital investment that in turn would stimulate the economy.  Yet in the decade following the Bush tax cuts, US capital investment was by far the weakest in the post WWII era.  Additionally, real investment growth was more than three times greater during the Clinton years than either the Reagan/GHW Bush or the GW Bush administrations. Wealthy investors will place their money where it gets the best return.  During and since the GW Bush years, there have been record flows into high growth foreign emerging market debt and equity funds supporting the contention that the tax cut benefits went abroad rather than into our own economy.

Comment: Could you please explain to the public why we would want to continue to borrow money from China to pay for your tax policy when the benefit is being invested into foreign economies, including China, and our future generations are being strapped with this debt.

9.  The wealthiest in America already pay a lower tax rate than the middle class due to a disproportionate amount of income from dividends and capital gains.

Comment: With the wealthiest already paying a lower overall tax rate than middle America, could you please explain the necessity for extending the tax cuts for this class during the current economic recovery, and why you will refuse to act on any other legislation (including relief to 911 first responders, extending unemployment benefits to the needy, and extending tax cuts to the middle class) until the tax benefit to the wealthiest is preserved.

10.  There are those amongst the wealthiest, including Warren Buffet, who are of the opinion that taxes should to be raised on the wealthiest of Americans.  The public is also concerned about special interest monies influencing decision making in Washington.  It has been reported that a substantial portion of special interest money from Crossroads GPS, that supported Republican candidates during the recent mid-term elections, came from a small circle of extremely wealthy Wall Street hedge fund and private equity moguls and that GPS Crossroads was acting in a coordinated effort with other special interest funding in placement of that money (ref).

Comment: Could you explain to the public as to how your party is not in a conflict of interest on the matter of preserving tax cuts to the wealthiest.

One final point in closing.  Your party benefits from conservative media and there is nothing wrong with that.  However, some of the language coming over the airwaves is incredibly divisive and preys upon bigotry and hatred for political and financial gain.  As some examples, our president, who has a white mother and a black father, has been referred to as a ‘Halfrican American’; we have heard that our president has a deep seated hatred of white people or the white culture; that ‘banker’ is a code word for ‘Jewish’; that when a gay turns his back to you it is not an insult but rather an invitation; and many others.  This language is divisive, it mocks principles enumerated in our Declaration of Independence that were carried forth into our Constitution that all men/women have been endowed with unalienable rights including life, liberty, and the pursuit of happiness, and it tears at the very fabric of our diverse society.  My belief is that your party can not take the stance that it is not responsible for such behavior when it is benefitting from it and when major figures from your party are taking the same stage at CPAC as these broadcasters.  I am asking that the leadership of your party denounce this type of language and these tactics.